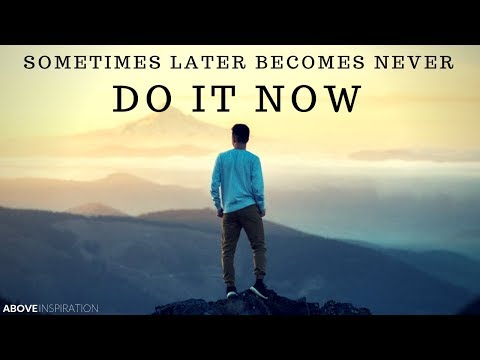 You’d be amazed at so many people in the world today who think things that they don’t do Meant to do it never got it done. It’s hard to bring something from thought life to action Maybe it’s because we live in a world of procrastinators People who have great ideas and great goals and great visions and great obstacles and great problems and so they sit down with their ideas and their goals and say, you know, I’ll put it on hold And they look and the years go by and the hair turns white and the knees get stiff and they just thought it But they never did it see the older I get the more I realize That you can’t take life nor moments for granted I can a deal personally I can deal with death better than I can deal with regret Whatever I gotta say to you I’d rather say whatever I want to give you I want to give it whatever I need to express I want to express it because the next second is not promised All you have is the fierce urgency of now right now You don’t have long to get over whatever you’re going to get over climb over your inhibitions or fear The clock is ticking while you are thinking about it.

You are running out of time there’s a rush to do it There’s a rush to go after your dreams There the rush to go after your goals if you don’t hurry up and do it You won’t get it done and the most dangerous people are people who miss their turn Bitter people who miss their turn will try to kill your future They will become a Saul in your life and they will hate you Over something that you didn’t have anything to do with they’ll hate you David over a turn they missed There is nothing as bad as the sad memories of a lost opportunity Lost opportunities it’s a gift from God to have an opportunity When you woke up this morning God gave you an opportunity What can be a better gift than to get an opportunity And what a tragic waste it is to have an opportunity and not use it Not maximize it, not live it to its fullest and to assume You have tomorrow how arrogant of you to assume that you have tomorrow when in fact all you have for sure Is right now right Get it right, right now Get it said right now, get it done right now, open your heart right now Write the letter right now Express the love right now because if you don’t I can tell you from experience Coffins can’t hear And regret is poor company Sitting in a nursing home saying I miss my turn I can tell you this age doesn’t give you a do-over It’s terrible to get old and miss your youth It’s terrible to be divorced and miss your marriage I’m ready to be a good wife now, it’s too late I’d be a great parent now.

The kids are gone They’re here a moment, they’re gone the next moment if you don’t get it right you don’t always get a do-over You’d be surprised at the unwritten books in this room The businesses that are in your head That never get built, the ministries that are in you that are never evolving never created, the poems you didn’t write, the songs you didn’t sing, the books you didn’t create, the job you never went after, the interview you didn’t pursue, the chance that you didn’t take This message is for you .

This website uses cookies to improve your experience while you navigate through the website. Out of these cookies, the cookies that are categorized as necessary are stored on your browser as they are essential for the working of basic functionalities of the website. We also use third-party cookies that help us analyze and understand how you use this website. These cookies will be stored in your browser only with your consent. You also have the option to opt-out of these cookies. But opting out of some of these cookies may have an effect on your browsing experience.
Necessary Always Enabled
Necessary cookies are absolutely essential for the website to function properly. This category only includes cookies that ensures basic functionalities and security features of the website. These cookies do not store any personal information.
Non-necessary
Any cookies that may not be particularly necessary for the website to function and is used specifically to collect user personal data via analytics, ads, other embedded contents are termed as non-necessary cookies. It is mandatory to procure user consent prior to running these cookies on your website.
SAVE & ACCEPT